“Who will stand in the highest point, once occupied by spectators, must confess that the audience of a theatre had never had such a sight before. On the top of high cliffs, several fortresses stand; down below, the city; even if these are all modern buildings, there also were similar buildings in ancient times in the same place. The view goes from the long hilly ridge of Etna, up to the beach of Catania and farther to Syracuse. The huge smoking volcano concludes the immense framework, but without harshness, since the vapours of the air make the volcano appear farther and softer than it actually is.”. Goethe, May the 6th 1787 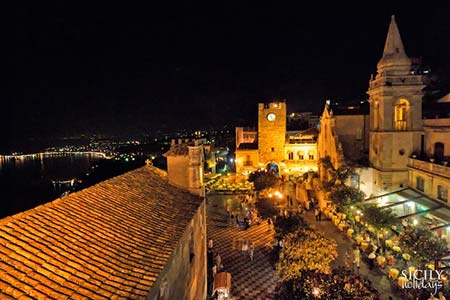 Taormina is loved and well known all over the world. It is the most visited Sicilian City thanks to a perfect mix of landscapes, sea and history. Like Giardini Naxos, is one of the most ancient Greek colonies and this is the reason why Taormina has some of the most important historical monuments such as the Ancient Greek Theatre (which hosts several cultural and musical events during the Summer), Corvaja Palace and the Cathedral.

Furthermore, the suggestive architecture of its alleys creates an evocative atmosphere which, united to a crystal sea and to the spectacular Mt. Etna makes Taormina unique and one of the most attractive places in the world. Maybe Taormina fascinates the visitor more than other places in Sicily.

Taormina is the right place for a relaxing stay, but also for nightlife. During the Summer, pubs, bars and chic nightclubs lighten all the streets of the typical Sicilian town.

In 359 b.C. the Greek Andromaco founded Taormina (Tauromenion) on a tight terrace watching the valley Southwards and Naxos territory Eastwards. There are two Byzantine fortifications, one on the mount Tauro and one on the peak Mola. On the South-west level, the Arab Taormina developed together with the Norman village, between Porta di Mezzo and Porta Catania, and also between cannon level and Taormina Castle. Umberto road, going from Porta Messina to Porta Catania, following the Roman route of Valeria Street, joins the Greek-roman Taormina to the Byzantine-arab-norman one, one looking to the coast, the other dominating the valley.

The Clock Tower with the Porta di Mezzo, divide IX Aprile Square from the Ancient Village in which there’re several churches as St. Catherine, San Guseppe dell’Addolorata, San Giovanni and the Cathedral of the XIII Century. From the panoramic view point of the square you can admire the wonderful scene going from the hill of the Theatre to Etna slopes, with the volcano itself enclosing the landscape.

The modern Taormina is the result of the expansive Medieval village hegemony on the “remains” of the original Greek-roman settlement. The ‘600 was a period of decaying for the town. At the beginning of the century the Crown sold all hamlets to the North, population decreased and moved down to the coast, attracted by a greater prosperity.

From 1700 the Greek theatre consecrated Taormina as one of the places to visit during the journey in Sicily, because it is witness of the past greatness of the city. It is also an extraordinary balcony which faces the sea and the volcano.

Nowadays Taormina is one of the most famous destinations in the whole world.